I learned a valuable life lesson. Life isn’t about everyone or everything being perfect. It’s about the misadventures, the unplanned madness of losing your luggage and being forced to spend your travel insurance money and going on the best shopping spree ever.
It’s about sitting at the fanciest restaurant and seeing a rat run past the table, only to end up at the closest McDonald’s in your formal wear.
And it will be perfect. Pretty perfect.

A looooonnnng pending post. I had promised I would take you through Kolkata with me. Apologies!
A handful of stuff I found in Kolkata which was fascinating/wonderful/awesome/or just plain out weird. I wanted to do a picture book thingie,but I guess this doubles as that,too.

✴The famous yellow ambassador taxi. I even rode in it this time.♥

I had so many of these ,you won’t believe. They are highly perishable ,so I had to curb my craving in Kolkata only. I think I might have gained a couple of kilos or ten.:/

✴The painted on buses.

No freaking idea what is written,though.-.-

✴The weirdly colorful buildings. They are so damn cute. I clicked so many pictures of these!

✴The beautiful sites. Where the hell were these during my first visit?! -.-

Just loveeeeee these.
✴The coconut trees.

✴The roadside “market”. People had these makeshift shops on the roadside. I dunno why,but I especially liked this sight.

✴The cute little food shop/stall. The jalebis don’t look so good, though. The dull orange ones are more my thing. This yellow doesn’t compel me. At all.

✴The dakshineshwari temple. So damn famous. And pretty too.

✴And the pigeons there. 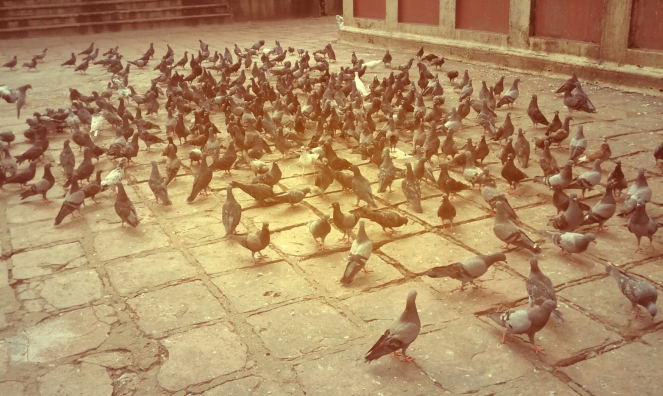 ✴And yes!This is not about Kolkata, as such, but I liked the idea of newspapers in 3 languages. I only ever read English and Hindi ones. So,those ones along with bangla just made me go wow. Weird ,huh?*sheepish smile*

P getting excited about Mrs.S’s cookies made a helluva lot more sense now. He always took some home to the boys and his baby sister now that she had teeth. He had this life, too. But he had us. This gorgeous girl didn’t have anyone.
She hadn’t had anyone. She did now.
“We both like cereal. She won’t admit it, but sugar flakes are her favorite. They’re mine, too,but I lie and eat the cinnamon squares and leave the flakes for her. I know she likes them best.”
I was wrong. She had K. She had her brother.

1000 likes!
Can you believe that?
A 1000?
Oh my God!I can’t, to be honest.I never even thought I would get 500 likes, let alone 1000.
10 days ago,I was freaking happy about the 100 follows. Two days before that?50 follows.
And now this.You people never stop giving me reasons to be exhilarated;to smile.
As I have mentioned time and again,I started writing because of my need for introspection, not popularity or recognition.Hell, no one even knows about my blog outside of WordPress. So,I never expected you all to follow me.And like my posts,ofcourse.
But it has happened!And I am so freaking happy!
This blog is becoming the food for my soul.
I cannot say it enough,but you people deserve to hear it and more.
So,a very big,very genuine,very from-the-bottom-of-my-heart-kind,THANK YOU SO MUCH.

WOULDN’T LIFE BE PERFECT,
IF SWEATPANTS WERE SEXY,
MONDAYS WERE FUN,
JUNK FOOD DIDN’T MAKE YOU FAT,
STUDYING WASN’T A NECESSITY,
GIRLS DIDN’T CAUSE SO MUCH DRAMA, EXERCISING WASN’T REQUIRED,
LIFE WASN’T SO CONFUSING,
AND GOODBYES ONLY MEANT UNTIL TOMORROW?!

I am not hot or gorgeous.I don’t have an amazing figure or flat stomach.I am far from bring considered a model,but I am me.I eat food,I have curves,I have more fat than I should,I have scars,I have history.I don’t follow fashion trends.I don’t have a strict fitness regime.Some people love me,some like me,some hate me.I have done good,I have done bad.I love my PJ’s and I go without makeup.I am random and crazy.I don’t pretend to be someone I am not.I am who I am,you can love me or not.I won’t change.And if I love you,I do it with my heart.I make no apologies for who I am.It’s just the way I am.

My roomies and I,decided to have a party of sorts.Well,it wasn’t exactly a party…it’s just that all of us felt the craving to eat something delicious.Yes.It was a craving for food.Not because we didn’t have dinner… but because “our minds weren’t satisfied with the food,even if our bellies were“.so…yes,we decided to eat noodles.Yeah,the-out-of-packet type, two minute noodles.And then it forged into hot and sour soup…and then throw in a couple of mouthwatering cookies…and yes,a hot, spicy packet of oats.And we had a partyyy!

Yeah,yeah.Not exactly a party,I know.But with nonsense conversations,gossiping and sharing the hilarious moments of the day we have had,it was a blast.

So,it got me thinking…if the most important ingredient of a good time is just great company? Or was it just tonight?!;)